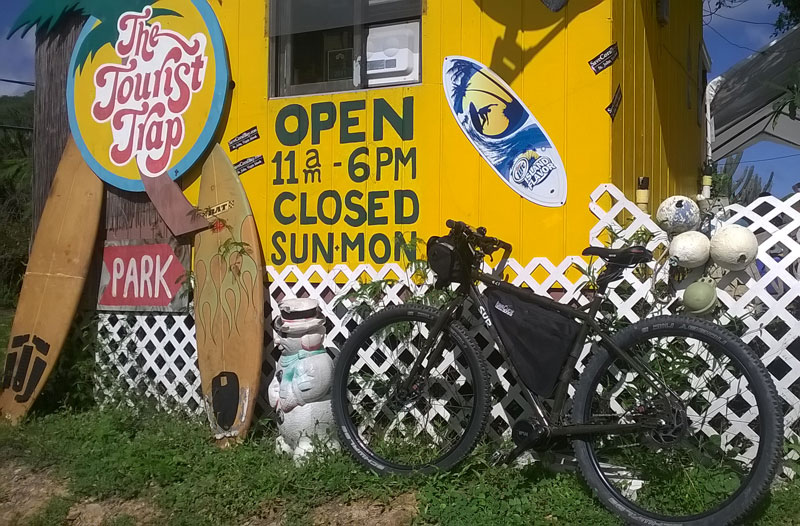 On my last day, I did an around the island trip starting with a ride from Cinnamon Bay Campground to Cruz Bay for breakfast.

After breakfast at the Landing, I drove over to the Westin, to see how my ebike would handle the short but steep hill on the way there.  I biked up the hill with a bit of effort, after getting down to about 2nd or 3rd gear when I probably should have gone to 1st.  I didn't stop to measure the pitch on this hill because it has fairly continuous traffic, but think it is about 18 degrees, so you will need a strong ebike setup to ride this.  Traffic won't like you being there, and is fairly continuous, so check for a slug of cars behind you before you start up and wait for a lull if you can. Maintain a straight line in a low gear.  There is a gutter cut you can use for the steeper part of the climb, which I did.  I was surprised that most of the rest of downtown Cruz Bay was fairly easy to negotiate in traffic, but you do have to be continually aware that cars might act as though you are not there, and be ready to move accordingly.

After that, I drove Centerline Road all the way to the Tourist Trap on the South Shore.  I generally do not advise driving a bike on the western half of Centerline road close to Cruz Bay, but I wanted to see how it would go.  The road itself is fine for a bike though there is a long hill with some switchbacks as you go out of Cruz Bay that will slow you down. You have to be constantly alert on a bicycle, mostly out of concern that a vehicle will come up behind you perhaps too quickly, and oncoming traffic might be crossing the center line towards you at the same time.  Traffic on this late morning trip on December 9th (still low season) was light and I enjoyed the biking.  I went all the way to the Tourist Trap, where I was asked to sit with the regulars with my iced tea, and Wayne from Concordia was there.  I knew Wayne from Maho Bay Campground years ago when he was a manager there and I would sit with him and my son at the bar seats and talk.  I had a good conversation with Wayne about Concordia and electric bikes, and about his biking on a Schwinn 5-speed and winning an uphill bike race in a little town on the Maine coast.

After my iced tea break, I biked down to Lamesur Bay to see how my bike would handle the steep hill on the way.  That section is now paved with cement so it is fairly easy to ride as long as you are in a fairly low gear for the steeper sections.  I remember taking jeeps through that mountain pass before it was paved, and it was much more 'interesting' then.  The hill was uneventful for my mid-drive 750 watt bike but lower powered or hub motor bikes might have trouble making it up these hills.  On the flat dirt road to the two bays, there were puddles, some fairly deep.  I wasn't too concerned with my large 29er wheel bike but did have the water come up over the pedals a couple times, and electric bikes can be finnicky if you get them too wet.  My bike was fine though I would not want to have the bike fall into the puddle.   I pedalled slowly and didn't have any problems.  Don't make quick turns in the mud or you may slip, and if things seem amiss, you probably should plan to touch down with your foot rather than risking a fall.  I in fact did put a foot down in one of the puddles when I hit a rock I didn't see.   Most of the 'high season' these puddles will be dry or small.  I was here at the end of the wet season.  If it is really wet, you might skip going down here or carefully plan your lines to minimize deep water.   You could park the bike soon after you get to the flat to avoid most of the puddles.  There isn't much you can lock your bike to down at Lamesur, and officially I am told that the national park service will frown on locking to fences and the like.  I'd like to see a six bike rack and solar charging station down at Lamesur.

Coming back from Lamesur, I biked down to find the Kiddel and Groupon Bay beaches, which are on the hardpack road just after Salt Pond Bay.  Neither beach gets a lot of visitors, and there are nice rock beaches with good snorkels plus I'm told there are a couple hiking trail options.  See the video for my route, I made a couple wrong turns having not looked at a map before I went this time, willing to do some ebike exploring.  The roads here are a bit rocky and bumpy but I consider them intermediate and most who have ridden mountain bikes off road anywhere else will be able to handle them, just go slowly with a low pedal assist level, which will both minimize the chance you'll fall and reduce the chance you'll get hurt if you do.   Afterwards, I went back to Concordia for a break and some more liquids, and found an awesome old physics book, "Music of the Spheres", which inspired me sufficiently that I bought a copy for my college freshman, leaving the copy I'd skimmed at the Concordia giveaway shelf.  I biked back to Coral Bay for the open mike, had supper and listened a while but the ride I'd hoped to get up the hill to avoid biking the centerline hill out of Coral Bay  in the dark didn't show up.  I waited till well after dusk to head up the hill, having fine lighting on my bike but still a bit concerned a car might not see me, so I pushed it a bit going up the hill and watched for headlights both oncoming and behind me so I could get out of the way if anything felt dangerous.  It turned out to feel much safer later in the evening than an earlier trip I had made at dusk, when drivers seemed to be rushing up the hill to get somewhere and also seemed unable to see me biking despite the good lights.  I tried, and succeeded, to do this part of the bike trip in low traffic, seeing just a handful of cars.

The ride down North Shore Road and up to Cinnamon Bay was uneventful.  It was my longest day trip at 34 miles, and my battery still registered two of four bars meaning there should be another 15 to 30 miles available if needed. 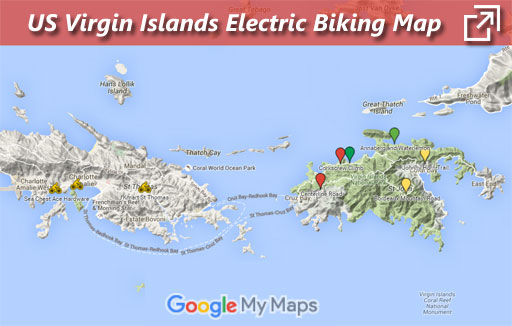